It almost didn’t happen due to rain, but with blue skies around 4 p.m. Saturday the tarp came ou the track and the Stanley Truck and Tractor Pull was underway.

With earplugs available for those in need and booths by the Girl and Boy Scouts at opposite ends of the Community Center, many booths came back, with Our Savior’s Lutheran hosting a youth group fundraiser and the Stanley Police Department selling shaved ice in diuerent flavors.

Those who were of legal age and wished to, could purchase beer tickets from a booth at the front of the Community Center, not staued by the Stanley Police Department.

With many categories and the triumph and black smoke as the night progressed towards evening, below are some outtakes from last weekend. All photos by Joseph Back. 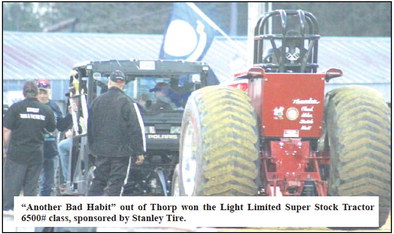 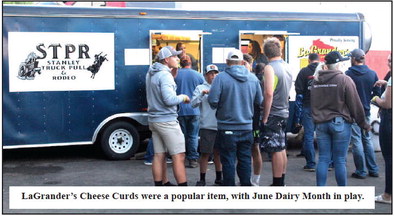 LaGrander’s Cheese Curds were a popular item, with June Dairy Month in play. 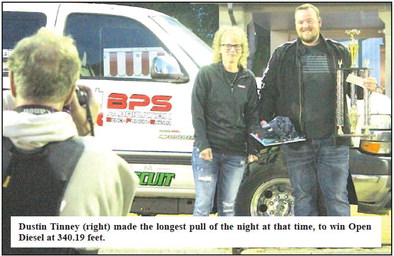 Dustin Tinney (right) made the longest pull of the night at that time, to win Open Diesel at 340.19 feet.

Cummin’ Along was among the entries in the Truck and Tractor Pull Saturday.

Tessy’s Popcorn from the Stanley Theater was on site, with (from left) Vinny Pries, Blair Atteberry, and Theresa Pries.