The view from Dickey Lake near Eureka, MT.
News
Journal

Our family is dealing with an unexpected tragic event at the time. On that note, Selina will be taking the role as author for the week and updating you all on her life!

Hello everyone, I was hoping to do this story later in the summer to cover everything I will do in Montana, but since we ended up having to do this so abruptly, I’ll fill you in all of the steps I have been taking to become a professional in natural resources.

At the end of May I finished my junior year at UW Stevens Point where I am double majoring in fisheries and aquatic sciences and water resources, minoring in soil science, and obtaining a certificate in wetland science. This last year for me though has been focused around learning outside of the classroom.

I was the secretary of the UWSP American Fisheries Society (AFS) this last year, and next year will be the Vice President. Through AFS I was able to meet and network with a variety of fisheries professionals; assist in a brook trout movement study where we electro-fished and pit-tagged individuals, did fyke net surveys on the Wisconsin River, and helped out with the data collection during the Lake Sturgeon Spawn. My proudest accomplishment of the year by far though was doing a research project assessing different riparian habitats and macroinvertebrate drift and participating in the UWSP Jim and Katie Krause CNR Research Symposium.

To say it briefly, my study was assessing how different land uses (forested, wetland, and agriculture) on the Little Plover River affected the number and composition of aquatic and terrestrial macroinvertebrates present at each site. Before I started, I was extremely intimidated by the idea of doing research and honestly did not think that I would be capable of doing it on my own. Luckily, I got to work with a great mentor and friend Rachael Valeria who had done the project two years before and was doing a similar project on brook trout diets and riparian land use. This project was a huge steppingstone for me, and I am so grateful that I had the opportunity to do it; especially because this project helped me get a new job during the school year which I absolutely love.

At the beginning of the spring semester, I started a job working in the Aquatic Biomonitoring Lab (ABL) on campus where I sort aquatic macroinvertebrate drift samples. Essentially, agencies like the DNR send us drift samples which contain aquatic insects from all kinds of waterbodies. By looking at the composition of macroinvertebrates you can make an assumption about the quality of the water and habitat in that area. Jeff Dimick runs the lab and has instilled his obsession with macroinvertebrates onto many of his student employees including me.

Shortly after I finished school I drove out to Eureka, Montana where I am working as a fisheries biotechnician for the US Forest Service. This is my first summer traveling for a job and I am so happy that this is where I ended up! Eureka is a small town that the Rocky Mountains run through and largely composed of land owned by the forest service, so there is more natural land than developed which I love!

Most of my job so far has entailed gauging streams to see the amount of discharge running through them. Many of the streams that we gauge are high mountain streams that rely on snow melt to flow, so it is important to see how the flows change as the course of the summer goes on. Since I have gotten here it has been relatively cool, there haven’t been many days above 70, rain has been pretty consistent, and when I got here a lot of the snow was still on the mountains. Last summer it was apparently in the 90’s almost all summer and very dry, so the weather is very variable; but this summers weather is not very common.

Very recently it downpoured here for two days straight and highs were in the 50’s, which resulted in more snow on the mountains after much of it had already melted. Many of these streams were already starting to fill up from the regular snow melt, and now with the additional rain and snow up on the mountains streams that we gauge are hitting record highs and there is flooding going on.

Soon I will get into more fish electroshocking and habitat surveys which I am really looking forward to. We also do a variety of other random small jobs as they come up; last week I went with my bosses to try and figure out if something was a “stream” and extra precautions would need to be taken as it was an area where logging will soon begin.

Overall, I am very happy to see the direction my future is heading. I still am unsure of exactly I want to do after I graduate but I am not in a rush to figure it out exactly as I have interests in so many different areas and know that I will figure it out with time. 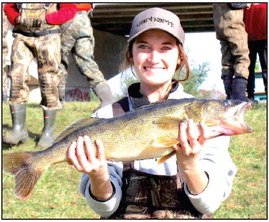 Selina with a nice walleye caught using fyke nets on the Wisconsin River during a survey for AFS.