Now over 121 years old since it was first dedicated, the D. R. Moon Memorial Library is looking to expandwest, with an empty lot located adjacent to the present building. Photo by Joseph Back.
News
Library looks to future with search for A/E services

Maybe you saw it in last week’s paper: a page three library ad seek- ing a "Statement of Qualifications" for "A/E services" in order to be – come eligible for an interview. So what’s that about?

firm to work with in carrying out the planned expansion and restoration project," D. R. Moon Memorial library director Elizabeth Miniatt said of the present. "Depending on expert opinion, the expansion will likely happen before the restoration of the current building." The expansion would take place on an adjacent parcel of land for which Walter and Marie Wartolec provided around $60,000 to pur chase and thus allow for possible

expansion, with the library addition meant to complement the existing structure while improving services.

In the meantime and as expansion plans start up again after a long slowdown, the community is en- couraged to get involved.

actively looking for commu – nity involvement through our Friends group and the cam- paign committee," Miniatt said. “Community members interested in being involved with the building project are welcome and encouraged to contact me." As to interested A/E firms, among those materials avail – able on request are a 35-page building program statement prepared by Miniatt along with John Thompson of the IFLS Library System, laying out the current situation as to services and needs, along with what is desired for the project.

"Our building program statement is an extensive guide, both for the library and any firm involved with this project, that provides all the necessary details about our current situation, space, and history, as well as our needs and plans for the future," Miniatt said.

Also available upon request is an RFQ outlining a Prelimi- nary Scope of Services related to the library expansion project. The deadline for submit- ting a Statement of Qualifica – tions after receiving materials is August 1, 2022 at 5 p.m. for interested firms, with inter –

Should everything go smoothly, refinement of con cept drawings is set for Septem- ber to November 2022. Neither the beginning of construction or a project completion date has been determined yet. As to the broader and multi-year project layout, meanwhile, 2022 is full of activity.

Among those items already crossed ou the list of the fiveyear plan approved by the li – brary board in January 2022 is to go fine free, a move ap – proved in February of this year. There are many more items on the list to complete this year including growing the Friends of the Library membership, presenting a socially distanced and digital summer learning program, and increasing library outreach through community partnerships and grants.

With community involve ment and a forward-looking focus these next several years, the long-awaited library expan- sion on Fourth Avenue could become reality. 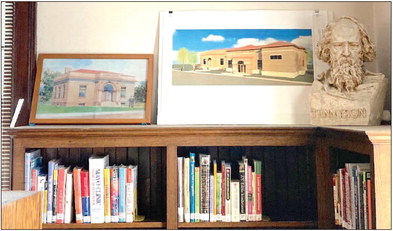 Perched on a bookshelf inside the D. R. Moon library, a concept drawing of the original building (left) designed by William Ellery Channing Whitney is seen from the University of Minnesota archives, while a former expansion concept from the mid-2010s can also be seen, and a bust of Alfred Lord Tennyson looks on at right. Photo by Joseph Back.