Not your average fireworks show. Redefining the term 'hot pond.’A thrill for all. Whichev- er definition you go by, the first annual Independence Day Celebration held on Saturday at Chapman Park, was a success, with the lake itself being utilized for truly unique displays.

Before the fireworks there was still plenty to do.

With overcast skies with a brief rain later giving way to sunshine, craft and vendor booths opened in early after- noon, with fishing lures and baked goods, along with health and beauty products among the many things ouered for event goers.

Come 3 p.m., the beer tent opened on the east side of the Community Center, a bean bag tournament taking ou on the west side.

At 4 p.m. it was time for two bouncy houses and other kid’s activities, including Team USA Football Drills with Scott Hamilton.

With a bucket rawe taking place inside and the Stanley Rod and Gun Club stavng the Community Center’s south food window to distribute free hot dogs along with water or soda (hand stamp for one per person), the 50/50 rawe worth $620 took place after 8 p.m., the relevant three numbers to win being 199.

From there the Stanley Fire Department lowered and walked a flag from lad – der truck 51 to the bandstand, where members of the Stanley, Boyd, and other VFW and Le- gion posts took part in a flag folding ceremony. Marthamae Kottschade gave an interpretation of each fold’s meaning as the flag folding ceremony progressed. From there it was presentation of the colors, and getting ready for the fireworks.

With crowds lining the west shore as well as present on the island, the Stanley Fire Department progressed east on Fourth Avenue, taking position at or near McKnight Street by Fandry Park.

Flashlights could be seen in the fireworks area as darkness fell, while a 21-gun salute rang out at 9:55 p.m. from the south shore. Before long the fire works started—by going horizontal toward the lake.

Sent from Fandry Park into the water, the unique display dimmed down before flaring up again, a floating light dis play on the water then burning out. From there simulated an- ti-aircraft fire went skyward in bright volleys, while fireworks in many diuerent colors soared far overhead. For several minutes the show at Fandry Park CELEBRATION

went on, with each new burst lighting the night, intensity broken by a lull and renewed intensity, leaving the crowds in suspense as to just when the end was.

"That has to be the grand finale," a man on the island was heard to say after one particularly intense fireworks display sent aloft.

As things turned out it wasn’t, but to see the fun repeated those who missed out for whatever reason, will have to wait until next year, at least for Chapman Park.

For those who missed Saturday or are impa- tient, another show hits Boyd this July 7, at Lotz 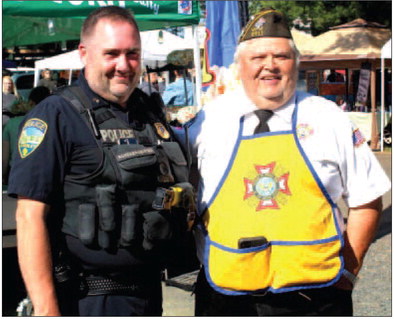 Stanley police sergeant Adam Kuechenmeister and Bob Wanish of the VFW were among those on hand at the Saturday July 2 Independence Day Celebration in Chapman Park.Photo by Joseph Back.