Park to reduce city water use with

Well pumping capacity is limited, and to that end, the City of Stanley approved an amended developer's agreement with ACE Ethanol at its regular meeting Monday July 18.

The amended developer's agreement comes as the city seeks to meet residential water needs and the ethanol produc – er drills its own private wells, earlier contracting with Ayres Associates to that end.

The new wells for ACE are expected to pump between

The west side of ACE Ethanol as seen from Janicki Road in the City’s West Industrial Park. Photo by Joseph Back. AGREEMENT

100,000 to 110,000 gallons of water per day, thereby osetting the load on city wells by the same amount. The plant itself was said to use around 350,000 gallons per day at present but oset this with the new wells, thereby reducing the strain on the city. The city replaced well number 2 in 2014 with well number 10 some twenty feet away, thereby retaining its present well capac – ity, the agreement allowing the city to forgo for now the need of another well. The opportunity to forgo another well is advanta – geous, as the current city water plant is maxed out at the present time, meaning that an addition would be needed if another well was drilled.

As to current well depth, water operator Don Goettl shared that well number 10 is 96 feet while the separate northwest well field is drilled down 65 to 68 feet, or as Goettl put it, "we stayed above granite." In other council news the city water operator made known that Lane Tank was making progress on the water tower by the prison and could be done in two weeks. "The water tower project is going good," he told the Council. As of Monday the tank was being power washed, with a ladder on the outside.

From water news the council heard from Stanley Police Chief Lance Weiland, who filled in the council on department calls re – lated to the Amerivu Inn and Suites, a site beginning to pose a problem that would need regulatory enforcement.

"We're starting to go there multiple times a week," Weiland said, as he shared that a hotel in Eau Claire and one at Bloomer were owned by the same family. Incidents the department was getting called to at the Stanley facility included "stabbings, traf –

ficking," and drugs, the chief said. "A lot of these things are or – dinance related," he said, then shifting to the campground, where one family had been banned due to things like digging holes and sinking a trench-not the usual campground activities.

"This particular family we've just had multiple complaints," Weiland said of the ban, with contact being made to ask if the ban was temporary or long term.

"I think that should be a one-and-done situation," council member Mark Fitzsimmons shared his opinion of the matter, with Jerry Allen asking his first question as a first ward council member.

"Are there rules and regulations for that?" He asked. With gray and blackwater issues reported and the nearby lake the an –

swer to that question was yes, as the situation risked DNR in – volvement. As such, Weiland said the city wasn't going to lose other campground customers for the bad behavior of one or a few users-the ban stood.

From there it was into signal issues, which had improved with a tower put up between Stanley and Boyd.

"A night and day dierence," Weiland reported of the im –

provement in communications. The situation wasn't fully rem – edied as there were other locations in town that the department had issues, partly on the ground that a signal couldn't get through concrete.

"Unless you go to a digital signal which the city can't do on its own," Weiland said. "The county would have to get involved." As such, the department had talked with the school regarding having a dedicated area to communicate with the outside should any expansion be made, the department being called to the school on an increasing basis along with the prison. Weiland also ad – dressed the question of trac issues at Dodge and Fourth Avenue in his bimonthly report, revisiting the question of a yellow line being drawn on the curb.

cerns at the intersection" Weiland wrote the Council on the mat – ter. "To date I am not aware of any further discussion or action regarding this matter and just wanted to bring to light again to see if this was something that the council was going to ocially investigate further," he said, adding that he had an appointment this week with the city attorney to discuss the ongoing ordinance violations in the city. Mayor Al Haas summed up his thoughts on the report from Chief Weiland.

"Everything he brought up in his letter I want to address as a committee of the whole," Haas said. The committee of the whole meets before council meetings, and while it cannot itself enforce or decide action, it can refer things to the regular council meeting for further action. Finally for Council updates, Fire Chief Korey Hagenson had news of his own: he wants to be a full-time fire chief.

"I would like to sit down and talk to the (fire and police) com – mittee about being full time starting next year," Hagenson wrote in his bimonthly report for the first half of July. "I plan on going around our area and getting people to sign if they feel I should be full-time." As such, it might not be out of step to expect a visit from the fire chief in the weeks and months to come-fire calls aside.

Work is progressing on the Stanley water tower stationed out by the prison. Water towers reverse the concept behind an artesian well, using gravity and water weight to pressurize the surrounding area on a predictable curve. Photo by Joseph Back. 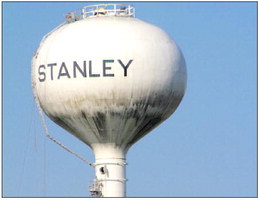