Lightning flashed, rain poured, and a flash flood warning that ran diagonally from Rice Lake to Marshfield through Stanley greeted the area early Friday morning as a torrential downpour and slow moving thunderstorms dumped five inches of rain in the area.

Rivers swelled, creeks became streams, and runo poured over roadways after local culverts found them – selves strained by the sudden onslaught. Over on Sawmill to the southwest, water spilled over the roadway, Out on Willow Road, mean –

while, a partial shoulder wash – out occurred, with the city coming in to tamp things back down. Public works operator in charge John Hoel filled in the Stanley City Council as it hap –

pened from his Friday report.

"After this morning's thun – derstorm we noticed that a culvert on First Avenue near the entrance to the high school may be failing," he wrote. "Part of the shoulder collapsed and we can hear large rock be – ing washed through the culvert. As the water recedes, we will be able to get a better assess –

ment of the culvert to deter – mine what needs to be done to fix it." The area in question being shut down and cordoned o to trac in the meantime, the afternoon sunshine brought to light the happy news that the culvert-tasked with equal – izing water pressure on either side of the road-had not failed to do its job, nor collapsed into a road washout. City public works employee Jake Lukes could be seen tamping down the shoulder Friday afternoon, while the road was clear of de – bris.

Sawhorses remained around the shoulder area to the north, however, with bare dirt visible where the near failure had oc – curred.

As to Friday's storm more generally, it caused a spike of over a foot in the water lev – el measured on the Chippewa River at Eau Claire, the mea – suring gauge just downstream from where the Eau Claire Riv – er empties into the Chippewa. The Eau Claire River, in turn, drains an area that includes the watersheds of the Hay River east of Boyd, along with the Wolf River and both forks of the Eau Claire further east. While dry as of Sunday, the Hay River just east of Boyd had signs posted on County Road X indicating "water over the road" recently, with Boyd itself rated at one out of 10 on FEMA flood maps in terms of flood risk.

Regarding the Yellow River due north, things were some – what lackluster as to water by afternoon, with the localized downpour concentrated on Stanley and the surrounding area. The Yellow River water – shed comprises an area north and west of Stanley, draining in turn to Lake Wissota. So why the big drain o as opposed to a drain in" as it were? That could have something to do with local soils, heavy in clay. Clay, which holds water well but doesn't absorb it as quick – ly, creates a situation in which sudden heavy downpours, can't go in. With a thin layer of Potsdam sandstone over – laying PreCambrian granite in the Stanley area, recent glacial activity in terms of geologic time resulted in this sandstone being overlayed with finer soil deposits, on which farms were built.

Shifting from soil depo – sition to more recent council appointments, meanwhile, the lists of city committees in Stan – ley have recently been updated to include new Ward 1 repre –

A vehicle makes its way along Sawmill Road after heavy rains Friday morning. While the driver made it through, water over roads can be dangerous, concealing washouts or even lifting a vehicle off its wheels. Photo by Joseph Back. WATER

sentative Jerry Allen with other council mem – bers. Allen replaces Hodowanic on the council, and as such is named to the following commit – tees: public works, streets, and grounds; city building, and health and sanitation, the latter of which he is the chair.

As to council business from the Monday reg –

beth Miniatt gave her regular report to the Coun – cil on library matters, including one for which community members are sought: the Friends group and corresponding planning of a library expansion.

"As we move forward with the addition plans, we are looking for people to join," MIniatt shared with the Council. For those looking for a cool indoor space to escape the heat or more information on the Friends group, the library is open Monday through Friday from 10 a.m. to 6 p.m. at 154 East Fourth Avenue, or across from Our Savior's Lutheran Church. Last but not least and shifting away from the Council to the near present, the depot made of Stanley brick, was due to come down Tuesday morning. Parked outside overnight was equipment from Westaby Trucking, with Westaby also complet – ing demolition of 211 East Maple Street across the tracks earlier this summer, after that home was declared a loss in the aftermath of the De – cember tornado. The depot is owned by the city for insurance purposes, with the railroad's signo needed to take it down or do anything else with it, given that the rail right-of-way bi – sects the building on the southern half. Lasting from after the Great Fire of May 18, 1906 to the summer of 2022, the depot's demise shifts the focus to building a library addition, as a public building with long tenure in the area and sole re – maining heirloom after the sale of Old City Hall in the fall of 2020.

The library addition, while taking time to plan, is once again in view–giving something

A visual record of what took place early Friday morning at Stanley. Photo by Joseph Back.

Using the bucket to help brace a backhoe, City public works employee Jacob Lukes tamped down the shoulder around a culvert on Willow Road, nearly overpowered by the sheer volume of Friday’s rain. Photo by Joseph Back. 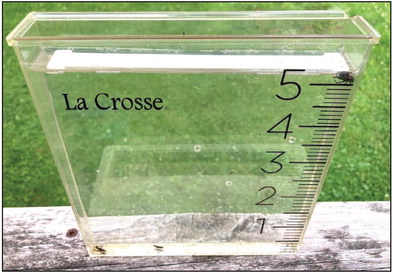 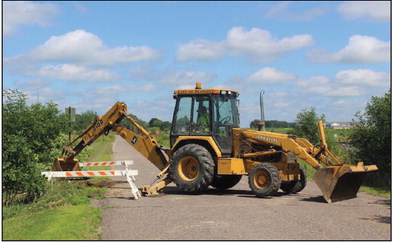