To better know the past, pay attention to the present. By learning from and un –

derstanding what is happening now, sim – ilar processes can be both recognized and inferred further back in time.

This basic principle of modern geol – ogy-called "uniformitarianism" among geologists-was on display Saturday at the Stanley Area Historical Society (SAHS) as Stanley-Boyd Class of 1964 graduate Richard Cance presented on rocks and fossils, along with the stories behind finding them.

"I've just always been interested," Cance said of his passion for geology. "I was breaking rocks as a kid." With retirement giving more time to indulge this passion, Cance had been around the country. Things started with a broader session in the modern concept of geologic time.

"500 million years ago, where we live now was down by Africa," Cance shared. The supercontinent then in existence, called Pangea, had been pushed apart by volcanic activity and drifting he said With

plate tectonics driving the pro – cess, it took 350 million years to get to where we are now, although still drifting. A plate on the Pacific was subjecting (going under North America), while another in the Mid-At – lantic was slowly pushing the two sides of the Atlantic Ocean open. With the Great Basin at Utah holding water and cre – ating an inland sea that grew and shrank, there were lots of fossils-just not in northern Wisconsin.

"When we come back to Wisconsin we look for fos – sils and we don't find them," Cance said. "Because the gla – ciers came through and pushed them down." Years ago bull – dozing had come across moss, uncovered and then reburied by glaciers. As to local geolog – ic activity, the glaciers had left ridges called moraines at their southernmost reach, with the most recent glaciation some 12,000 years ago. Advancing in winter and retreating in sum – mer, Cance shared of modern

glaciers that retreat was great – er than advance, "due to going through a warming period." From there, it was into the up close rock inspection.

"We had to get permission to get into all these quarries," Cance said of an amateur rock group he belongs to in the Chippewa Valley. Taking trips across the country, safety classes were involved, and per – mission.

"You can't just pick up and go to these sites," he said of potential trespass violations. Once permission was granted and the group on site, mean – while, it would break up and search for fossils. Discarded rock piles were called "tail – ings," or that which people had left behind in the search for fossils or other things of val – ue, like minerals. In Michigan there was less hassle than at quarries.

"They let you up in a lot of the old mines that are inac – tive because there's no claim," Cance said of his rock travels north of the state border. From the upper peninsula the presen – tation shifted to the south and west, with Cance also sharing photos from visits to grottoes at West Bend Iowa and Dick – eyville Wisconsin. A grotto is a site where rocks are used to create works for religious de –

votion, pilgrimage, and beau – ty. The Dickeyville Grotto has more information available at www.dickeyvillegrotto.com, while the West Bend Iowa Grotto has a website at www. westbendgrotto.com.

Though not mentioned, a smaller grotto once existed at Durand, Wisconsin as well. As to mines, Cance shared the sto – ry of one mine he visited called the Ingersoll Mine, still active and located in a volcanic dike.

"He'd get some rocks and dry them in the sun, because if they're wet and frosty when you split them they're just mush," Cance said. Sought in the rocks cut with a sheetrock saw were old fish fossils, in – cluding one of the Mioplossus, a relative of bass and perch. One attendee had a question.

"Those fish, do you have any idea how old?" They asked.

"They're 53 million years old," Cance replied. Dates in geologic time are arrived at via radiometric dating, which mea –

sures the level of certain ele ments in a rock called isotopes, and then uses a set decay rate (called half life) for these to ar –

rive at the given rock age, ap – plied in turn to fossils therein.

"But it's the pressure and lack of oxygen that makes it a really nice impression," Cance said of the fish in ques – tion. With a shallow sea, big flood event, volcanic ash, and diuerent fish die ou layers all involved in the Utah site, there were lots of fish-along with gastroliths.

Taken from Greek for "stomach rock," a gastro lith is a gizzard stone from a di – nosaur, the great lizards of old being similar in digestion to modern lizards and birds. Small rocks in an area rich in dinosaur fossils like the Butte land wash in Utah, were essen – tially automatic gastroliths.

"But these are gastroliths just because of where they are," Cance said.

Also touched on in the pre – sentation from Saturday was snowflake obsidian, which Cance said was like obsidian but with small parts that crys – tallize. Regular obsidian is a form of volcanic glass, with poor crystal formation.

Covering the Columbia River Basalts (an undersea lava eruption near Washington) along with the Petrified Forest, Black Rock Desert, and oyster shell fossils some 10,000 feet above sea level, the presenta – tion of Saturday was enjoyed by all.

As to fossils in Wisconsin, the best place to look, could be south-glaciers didn't reach the entire state, it turns out.

Richard Cance and his wife Jean talk to event goers in front of a rock and fossil table at the Stanley Area Historical Society Saturday. Photo by Joseph Back.

Richard Cance shows a picture taken in Alaska. Take away the mountains, and it resembles the area just north of town 12,000 years ago, with glacials streams leaving an esker and ice boulders digging in to leave melt holes called kettle lakes. Due to heavy glaciation, most fossil bearing rocks have been scrraped from the surface in this area, though some were found during road work on H in the 1950s along with a farm, buried some 20 feet down. Photos by Joseph Back.

A grotto at West Bend, Iowa was among those shared by presenter Richard Cance at the Saturday rock presentation put on by the Stanley Area Historical Society. Photo by Joseph Back. 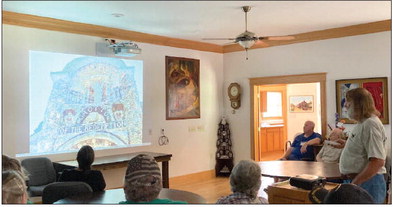