Miracle on a Montana Mountain

It seems some of the best trips I go on begin with adversity of some sort. This week you will find out that my Montana elk hunt began in a very scary way.

Our plan was a simple one, or so it seemed to us, for our self-guided elk and mule deer hunt in the Gallatin National Forest near Bozeman, Montana.

Jeff Neitzel and a friend of his, Dan Clark of Belgrade, Montana, planned to hike about 10,000 feet and spend the night before the opener on the mountain. They hoped that at sunrise, hunters climbing the mountain would push elk toward them.

Dan Berry of New Lisbon and I would make the climb together and set up a quick camp with the same plan. Our base camp is a simple and comfortable cabin at the foot of the mountain.

We woke up this morning to a light snow fall. By the time we parked Dan’s truck at about 6,000 feet, there were four inches on the ground, and it was adding up fast.

Dan and I were supposed to follow a rocky creek in a mountain gorge leading to the top. At some point on the planned two-and-a-half-hour trek to just about 10,000 feet, we were supposed to cut to our left to a forested area.

Bad luck came our way when blinding snow comvey bined with fog and a lack of knowledge of the area caused Dan and I to miss the forested and safe route.

What happened over the next three hours is still very difficult for me to write about. I hand wrote this story four days later from a mountain top.

Thinking we were on the right course; Dan and I came to a very narrow spot in the canyon where the only way up was to spread our arms and legs and shimmy up the side of the mountain. Thinking our challenge would be short while carrying 35-pound packs and rifles, we made the 100-foot vertical climb.

At this point, visibility was down to about 300 feet, and we came to a rock wall that we thought would end after another 50 yards of dangerous climbing. Dan and I made the climb by putting our rifles above us on the mountain wall and literally scaling the rock wall two feet at a time.

Snow that had now accumulated to six inches, made grabbing, and holding onto rocks just as terrifying as any fall would have been. With both of us clinging to a rock, we realized a fact neither of us will ever forget. We couldn’t climb down and had a 1,000foot wall to scale.

We had no climbing equipment, no experience, a snowstorm, a pack to carry, and a rifle to push two feet ahead of us with each pull up. Three times Dan asked me for help because he was stuck or exhausted.

Three times I did the same as I became hung up on ledges that I tried to go over by putting my body and backpack on the outside of a rock and pulling up while dangling over a 1,000-foot drop. I couldn’t help Dan, and he couldn’t help me. We were on our own, and that’s how it had to be.

Our rifles were a real problem because they hung up on the mountain wall and it was very hard to lift them over our heads and find a place for them to rest.

Dan’s seven millimeter got most of its front sight worn off and hundreds of scars in the stock. The last hour of our experience had both of us praying, scared to death, and in the back of our minds thinking that at least one of us wasn’t going to make it out alive.

I was generally about 20 feet above Dan and scared I was going to take him out with a falling rock or my own falling body. Once I caused an estimated 25 pound rock to directly fall and strike Dan on the shoulder. I hopelessly watched my buddy do what I figured was his death fall, and then miraculously catch himself.

To make a long story short, we made that climb, hit the top with eight inches of snow, darkness moments away, and physically and mentally shot.

Sixteen inches of snow fell, and the next morning’s elk hunting was not a top priority for either of us. This was the most dangerous experience Dan Berry or I have ever had in our lives.

Bonded by the Mountain!

Dan Berry at the very start of a mountain trek that would become a test of sink or swim and staying level headed in a very dangerous situation.

Our view from the mountain top the day after the climb/blizzard! 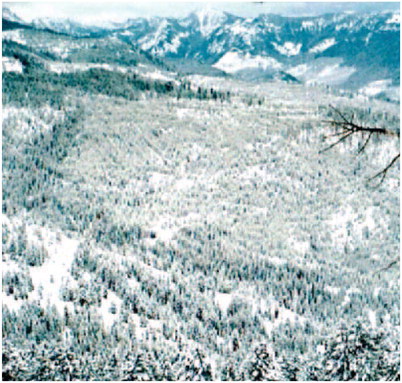