The time was just after 5 a.m. on June 30. The sun was over the horizon, but hidden with clouds.

“It’s a bittersweet day,” Cin- dy Wozniak said from her and husband Brian’s farm south of Stanley on Highway H.

Bittersweet, because it was the day their dairy herd would be loaded and sent ou to be auctioned, down at a place called Oberholtzer's between Spencer and Loyal. The trucks and trailers showed up before 5:30 am., the cows to be loaded and dispersed to other herds. Seth, Matt, and Brian (not Wozniak) were the truck drivers. Loading up and waiting to enter Highway 29, the cows and their drivers went ou

to Loyal. With each cow auctioned, milked and then loaded at Oberholtzers later that after noon, it marked the end of over 100 years of dairy farming by the Wozniak family. First begun by Joseph Wozniak after he came from Poland and worked 15 years in the steel mills at the Twin Cities to buy land for a farm, the Wozniak's expanded over three generations, from two 1/4 sections on the east side of County H owned by Joseph to three adjoining farms at the end. Joseph Wozniak's grandson Brian took over from his mom and dad some 36 years ago, answering questions on what goes into a dairy operation and how farmers work to bring their product from farm to supermarket.

“The farm has been in the family for over 100 years three generations,” Brian said. “My grandpa came over from Poland. I bought a portion of my farm from my parents about 36 years ago. On a modern farm every load of milk is tested for antibiotics, bacteria, and com- ponents." With Wozniak listing typical farm work that included chores twice a day along with feeding and milking cows, there was also field work, barn cleaning and winter feeding to think about. Wozniak said that farms are inspected by state and federal inspectors.

“Farms are also inspected by the farm program to ensure the safe treatment of animals,” he said. Among the perks of being a farmer, meanwhile, was getting to be ‘your own boss,’ and the lessons passed down through the generations.

“Kids and friends and grandkids all learn about farming by feeding calves bottles and working with you, learning a good work ethic," Wozniak said. Also among the experiences of a dairy farmer, are commodity price swings on milk.

“In the dairy business getting time away to go on vacations helps us so milk is sold by the 100 lb. increments,” Wozniak said. "I've sold milk from in the $9 range to $27 per 100 lb.” So what should non-farmers know, now that the Wozniaks have sold their cows?

“Non-farmers should know that farmers work hard to produce a quality product on the farm and sometimes eight hours isn’t even half a work day on a farm. Farmers put out a safe product for the consumer and a very nutritional product,” Wozniak said.

Brian Wozniak on the last night of milking prior to cow auction the next day. Submitted photo.

The original Joseph Wozniak farm as it existed in 1930 south of Stanley on Highway H. With boundaries changing over the decades, the farm later expanded and moved across the road to the north side of the curve in H. Map compiled from historic and contemporary sources. 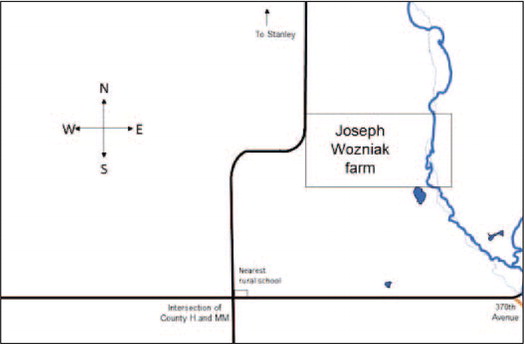