First comes the rain, then comes drainage. But if the downspout tasked with draining the water isn’t operational or otherwise unhinged, problems can result. Such was the case after last week’s heavy rains in the Stanley-Boyd high school library. It came down from above, drenching the carpet and following a path of least resistance down the senior hall towards band and choir rooms.

Along the way, the heavy rains that weren’t properly drained damaged the exterior of col-

Seen from left to right, school board members Denise Hoffstatter, Bob Geist, Becky Peterson, and Lance Carlson listen in the high school library as missing overhead ceiling tiles and other fallout from recent heavy rains and an unhooked downspout surround. The books were saved. Photo by Joseph Back. DAMAGE

umns in the library while leaving the steel core of each intact and took out four bookshelves while books were boxed up to prevent moisture from taking hold as the room was dried back to a useable state.

Theories abound as to how the downspout came to be unattached. The damage, is not as debatable. District superin- tendent Jeu Koenig gave an update on library damage from the recent heavy rains at the Monday school board meeting.

“As you can see, the library sustained damage from the heavy rains we had,” Koenig filled in board members and other attendees to the meeting July 25. The good news in part was that only four carpet panels looked like they needed to be replaced, while the books had been saved and fans were being used to help dry the room near the column bases.

“Is that wood particle board or real wood?” Board member Lance Carlson asked of square column finish, getting the reply that it was indeed ‘real.’ Three columns, on the southwest, northwest, and northeast re- spectively had seen superficial damage, with water drainage seen to cause bubbling on the exterior sheetrock of the northwest column, even as the column itself was sound. While roof work was ongoing overhead at the time of meeting, no cause had yet been determined as to how the deluge had sprung.

“I’m guessing that we’ll get notified by our insurance company that it’s not covered because it’s not our fault,” Koenig shared a guess, while ovcial word was still to come as of Monday.

In other news from Monday, Pupil Services Director Krystle Bacha gave the annual seclusion and restraint report for Stanley-Boyd schools and alternative settings the district monitors. A ‘Seclusion’ was defined as "the involun – tary confinement of a student, apart from other students, in a room or area from which the student is physically prevented from leaving,” while a physical restraint was defined as "a re – striction that immobilizes and reduces the ability of a student to freely move his/her torso, arms, legs, or head.” Both seclusion and restraint require an annual report to the school board on their use, the current law going into auect in March 2020.

With Bacha reporting in turn that there had been four seclusions related to one student with a disability and six restraints pertaining to three students (also with disabili- ties), Bacha answered a ques tion from Carlson as to people restraining versus use of mechanical restraints.

“There are some schools in our country that still use mechanical restraints,” she said. “Not here at Stanley-Boyd.” Instead, certified stau members trained in the use of said tech- niques utilize these in a man ner not harmful to the student physically.

The scene in the school library after recent heavy rains. Submitted photo. 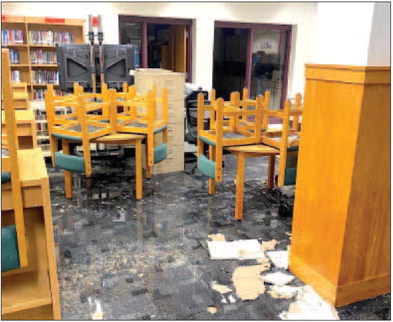