“It’s been a real pleasure to help everyone out". These are the words Darrel (Scrap) Geist says as he closes a chapter of his life. On Thursday, July 28, Darrel and his wife Loreen handed over the keys to the Boyd Trustworthy Hardware store on Boyd’s main street to Dan Pilgrim, a lifetime resident of

Back in 1998 Darrel was working construction and Lynn Severson, owner of the hardware store (Lynn had purchased the store two years earlier from Ted Arneson) mentioned the store was for sale and that maybe Darrel should consider buying it. Darrel's first thought was "no way, I like working outdoors and don't know anything about running a store". That night as he lay in bed, he kept thinking about that store and the next morning de- cided maybe it was a good idea. His wife Loreen wasn’t real sure about it but was ready and willing to support Darrel. In October 1998, with no experience in running a store, Darrel and Loreen became the owners of Boyd Trustworthy Hardware.

There is just something special about a small town hardware store. Whether it's the old square floor tiles, the plate glass win- dows in the front, or just the smell of history, walking into the store gives you that warm feeling of being part of something that's been around for longer than most folks in this area. For 24 years, Darrel has been the local "go to" guy for hardware, and just about anything you might need. In addition to selling nuts, bolts, and tools, you could find ladders, work gloves, brooms, canning jars, bird feeders, kids’ sleds, coolers, batteries, well, you get the idea. In addition to all the merchandise, he also sharpened chain saw chains, carbide saw blades and hair cutting shears, cut glass and repaired screens, and would replace your watch battery and restring your weed eater. He is also a licensed gun seller and has been buying and selling guns since 2007.

Darrel was the kind of store owner you don't find much any- more. Loreen recalls a cold Sunday morning one winter when the phone rang (Darrel kept his home phone number posted in the window of the store just in case somebody needed something when he was closed). A customer had some freezing up issues and needed some parts. Darrel went down to the store and opened up so the guy could get what he needed. Then just recently a newcomer to the Boyd area came in and needed a certain sized wrench. Darrel didn't have that size on the shelf so he went into his toolbox, got out the right wrench and handed it to the customer. Darrel told him to go ahead and use it, then just bring it back when he was done. Recently while talking to Darrel in the store, a customer came in and asked if he had a fly catcher. Dar- rel, knowing exactly what the guy was looking for, got out from behind the counter, walked right to the shelf that had the item and handed it to the customer. That’s what small town customer service is all about.

Back in the early 2000's, Darrel and Loreen thought the side of the building needed something. They went to the Historical Society in Boyd and found an old picture of the Yellow River bridge that was north of Boyd on Hwy D (by what's now known as RiverView). Darrel talked to Brenda Peterson about painting a mural from the picture that could be put on the building. For tunately, Brenda agreed to the plan and Darrel took 6 4x8x¾ inch sheets of laminate poster board to Brenda’s home where she painted the bridge scene from the picture. When all the sheets were painted, Brenda's husband, Dave, took them back into town and helped Darrel mount them to the building, making a 24 x 8 foot mural. The mural is still there today, although the small heart with Darrel and Loreen's initials that Brenda painted into the trunk of a tree have since faded away.

Prior to Covid, Darrel always had popcorn and Dum-dum suckers for his youngest customers. He figures every kid in town (and even some parents) enjoyed a few of the treats. He says, "I've enjoyed going to work every day", and it shows in how he cares for the store and his customers. And for those wondering, the milk can stool is staying in the store.

Darrel states, "if everyone gives Dan the support they've given me, he'll do just great here". According to Darrel, Dan will continue to provide all the services he did while in the store.

What's next for Darrel? According to both he and Loreen, there are a few jobs that need finishing up around the house, and Darrel says he'll be available if Dan has questions. We say, "Thank you Darrel and Loreen for 24 wonder- ful years as the caretakers of the Boyd Trustworthy Hardware store". We're sure the old floor tiles, walls and ceiling hold many memories for you and all your loyal customers.

The old bridge as it appeared at Riverview, in a mural painted on the hardware store outside. Submitted photo. 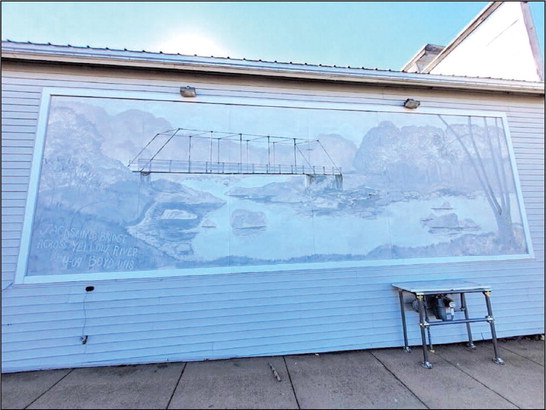 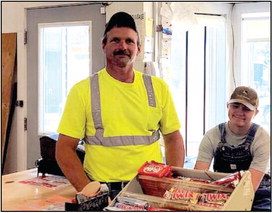