They came, they stayed, they had a good time. Taking place Sunday July 31 at Chapman Park, the Stanley Lions held their 48th Water- melon Fest. Included in the fun this year was a cake walk, 5K run, kids games, car show, and several vendor booths, to name just a few perks of showing up.

Also in the mix was a rawe, the benefits of which ranged from a $25 gift card to Whispering Pines, incremental dollar prizes of $50, $100, and $250, all the way to a bench or nine holes of golf at Cadott.

As to the vendor booths, there were many, with ouerings ranging from fossils and agates, to clothing and products from Sarah’s Garden, a booth staued by mother and daughter team Bev and Sarah Kelley.

Over at the library booth, meanwhile, library board president Cathy Ryba said the library was a gathering space when asked, and that with the addition there would be even more space.

Architects, it seems, have been responding. Also among the booths at the Sunday Wa – termelon Fest was that of Ted and Anita Smith, now of Spooner but originally from Stanley and Thorp respectively.

Down at the Trinity Vineyard booth, we quizzed Linda Hakes on what reading the Bible would help us learn.

"The best path for your life," she said after considering the question.

Over at Tastefully Simple, Tom and Joan Felder had a booth for their direct sales busi –

Later in the day around 11 a.m.. there was the cakewalk, with at least one winner netting a cake from the deal–hence the name.

As to the Car Show, it was presided over by Duanne Booth, taking over last year from Chuck Poulter, who retired.

With 10 categories and two winners in each plus one for Best Show, these are the winners of the Stanley Lions Car Show.

Starting with Best of Show, the winners were Dale and Jean Horgen of Chippewa Falls with a 1950 Mercury.

As to the Modified Class, it was LilyAnna Brandt with parents Hunter and Sarah Brandt, the car a custom model from 1932.

Switching over to the Chronological listing of classes, Bill Reeves took first place in the 1900-1951 category with a 1951 Olds Super 88 Hydromatic, the engine a 303.

Moving closer to the present, the 1952-1964category saw Olie Olichwier of Bloomer take first place with a Cadillac Model 60 4-door, the engine a 346 V8.

Moving forward again we come to the 19651974 category, with first place going to Deb Thill with a 1967 Plymouth Barricuda, automat- ic transmission.

Taking second place in the category was John Modl with a 1971 Plymouth Sport Fury GT.

Moving to the years 1975-1984, first prize in the 2022 Lions Car Show went to Julie Mattieson of Boyd with a 19789 Oldsmobilie Cutlass Supreme automatic transmission.

Second place in the 1975-1984 category went to Todd Morgan with a 1979 Pontiac Silver Anniversary Trans-Am four-speed.

Coming in next in the Lions Car Show was Marlene Lee, who took first place with a 1989 Chrysler Maserati TC featuring a 2.2. turbo in the 1985-1994 category.

Second place in the category went to Jeu Schmidt of Boyd with a 1986 Dodge Ram Char- ger.

Taking first place in 1996 to the present were Ron and Arlene Mews with a 2018 Ford Mus- tang GT.

Coming in second for the category was Rick Welsh with a 2016 chevy Corvette.

The Lions 5K run starts out at 9 a.m., running past the Elk Park and then right towards Stanley. Photo by Joseph Back.

A well nourished Reed Anderson took First Place in the 5K Run Sunday, with a time of 16:03.7. Submitted photo.

Eliana (left), Doug, and Braelynn keep watch at Cathy Eichner’s stand at the Watermelon Fest. Photo by Joseph Back.

Alexi Macdonald came in with a time of 22:28.4 in Sunday’s 5K, taking the top women’s spot. Submitted photo.

Library Board President Cathy Ryba staffed teh Library booth Sunday. Asked as to why one should go to teh library, Ryba stated in part that,“It . Photo by Joseph Back. 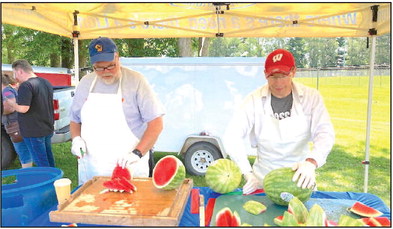 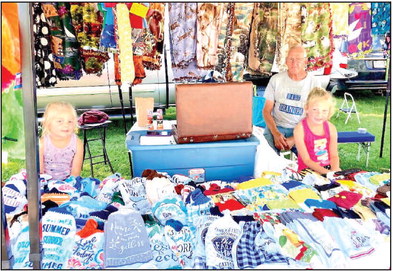 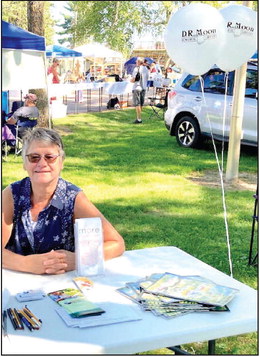