A large group of people were on hand Saturday, September 17 at the Hill House Bar and Grill in Boyd for the 1st Annual Chicken and Chrome fundraiser in memory of Jon Kott. As you may remember, Jon was the young man who passed away from natural causes last December at the age of 23. He is the son of Jim and Cindy (Ederer) Kott. Jon’s family and co-workers wanted to do something special in his memory, so the Mid-State Truck Service Memorial Scholarship fundraiser was born.

According to Mindy Miland, co-sponsor of the event, there was a great turnout for the event. The Chrome part of the day boasted almost 60 motorcycles and cars registered for the show. Award for Best of Show – Car went to Bob Henri, and Best of Show – Motorcycle went to Jon Zmuda. 1st and 2nd place winners in the car categories for Best Engine, Best Paint and Kids Choice included Dennis Nitz, Nathan Haas, Bob Henri, and Jeremy Robinson. 1st and 2nd place winners in the motorcycle categories for Best Paint, Best Engine and Kids Choice were Erin Bergman, Josh Sales, Frank Brown, Bernie Bergman, Waylon Copenhaver and Matt Derks.

There was plenty of chicken on hand as well as deep fried cheese curds for those coming hungry, as well as 60+ donated baskets to put your name in for the raf- fle. Baskets included tools, sports items, items for your pet, wine sets, seasonal decorations and much more. Two 50/50 drawings were held and won by Bob La-Marche, who then donated the winnings back, and Julie Ebert.

Due to all the hard work of all the sponsors and donors, enough money was raised to fund the scholarships to Chippewa Valley Technical College for deserving students. Jim Kott stated, “It was a great day!”

It takes a large amount of work and dedication to make this type of event a success. There were so many sponsors and donors that stepped up to help, too many to list here, but the family and friends of Jon would like to personally thank all those that donated and helped in any way. Without your help, this couldn’t have happened. Hope to see you next year at the 2nd Annual Chicken and Chrome event!

The John Kott Family with a photo of John at the Hill House Sept.17 . Submitted photo.

How it looked under the roof. 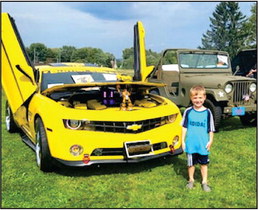 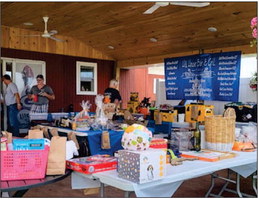