Recently traveling through Danbury, Wisconsin, I stopped to view the recently erected statue of the Jordan Buck located along the Gandy Dancer Trail.

Most avid deer hunters have either heard of or read stories about the famous Jordan Buck. One hundred and eight years ago in 1914, a young deer hunter by the name of James Jordan, while hunting along the Yellow River near Danbury, harvested what would become recognized as the world record typical whitetail buck.

The Jordan Buck is currently the second highest scoring typical whitetail deer ever shot in the United States. It held the record until November of 2021 when Dustin Huff, while hunting with a crossbow, shot a higher scoring buck in the state of Indiana. The number one typical buck in the world was harvested by Miles Hanson in Saskatchewan, CANADA in 1992.

The Boone and Crocket Club officially recognized Jim Jordan as the hunter who harvested the record buck in December, 1978, two months after Jordan at the age of 86 had passed away.

The original antlers are now owned by Bass Pro Stops in Springfield, Missouri, which purchased the rack in 2001. A number of Jordan Buck replicas can be viewed throughout Burnett County, including at the DNR’s Crex Meadows Wildlife Area Visitor Center near Grantsburg, Wisconsin.

The story of the Jordan Buck will take on more meaning this Saturday, September 24 when Danbury will celebrate “Jordan Buck Day” from 10 a.m. – 9 p.m. At 10 a.m., there will be a dedication of the Jordan Buck statute. Ron Schara of the Minnesota Bound outdoor program will be the featured guest speaker. A number of members of the Jordan family will be in attendance along with members from the Whitetails Unlimited organization. At 12 pm, there will be a Jordan Buck parade. There will be numerous activities throughout the day for young and old alike and a street dance will follow the day’s events from 6 p.m. to 9 p.m. 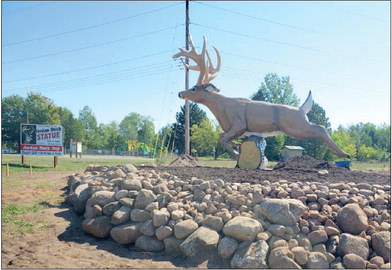